From the true feast of Passah: Are you a Jewess, a Jew? 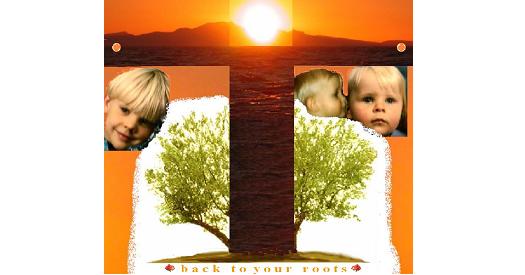 A story, how it could have really happened, a story written to comfort all those having lost a parent by death or parental divorce. May you know that there is someone who cares and will never forsake you like human fathers or mothers are sometimes forced to do. By Eric Martienssen.

Isn`t it strange, that grown-ups kneeling under the cross, often have such heavy hearts? While I am doing so, I always feel reminded to the strong, blessing arms of my heavenly Father. You wanna know why? – By the way, my name is Saskia Fee. The latter name means fairy. Of course I am not a real fairy, it is just how my father used to call me by my name (Isaiah 43:1). I am a teenager of 16 years now and I like to take you back with me into the time of my early childhood to an event that should change my whole life.

It was Good Friday´s Eve in 1996. This time, both, the Jewish feast of Passah and the Christian Easter were celebrated in the same week. This is necessary to mention as you will see later on.

I was four years of age and awoke by my mother´s loud quarreling voice that made me run to the window. It was dusk when I had a glance on the veranda downstairs. My brother Patric Steven, four years older than me and my little two years younger sister Bea Sissy were already fast asleep – sleeping peacefully like in Abraham´s bosom, not realizing what was going on. In the reddish light of the sunset, I perceived my mother´s shouting words at my father: “You will never, never, never see your children again!”

Did I get it right? I should never ever see my beloved father again, whom I loved more than anyone else in the world? At that time with my innocent childish heart it had been difficult to imagine how my mother intended to separate us from our father for good.

Today I know that she obviously used a rather approved mean – having happened so many times before in the run of history – to get father / Father out of children’s life. As I learned later on he had had a personal experience with the “Man from Galilee”, slain for all mankind, its sin and burden (Isaiah 53). So my mother, not able to consider my father’s faith, went to her “holy church” and had my father and his belief in an expert opinion declared as potentially mentally disturbed. This was even confirmed in a court procedure, claiming “in the name of the German people” that he could be a danger for his children!” And that is all!”

Over the years I had become a teenager, yet I suffered more and more from the loss of my father, missing him dreadfully. One of these days the longing for him became so strong, that I had a daydream. In fact, to me this event became so real, that I consider it as an answer, given to me by the One who promised to care for all the shattered souls and orphans, which I am – at least partly.

So in this daydream, I learned to know a boy. He was very handsome, had strong arms, lightblue eyes – just like my father – and a heart of gold, almost divine, I thought. The only disadvantage was his poverty and beyond this – he was a Jew.

In spite of this, I liked, yes loved him with all my heart, a daily more and more and deeper getting feeling overcame me. Although my mother asked me – a protestant girl – not to associate with such a boy, we met secretly.

It didn`t take much time, while playing outdoors, I came to know his friends. We used to meet out of the town close to a huge sparkling lake that seemed to be made of glass. My friend and his eleven companions were just like he himself from the tribes of Israel. My friend belonged to the one of Judah and all the others had each their origin in the remaining tribes. With longing hearts they uttered the name of the “New Jerusalem”.

Far behind the glassy lake, there was something like a mountain. In the bright light of the sun it looked like a golden throne. My friend explained, that this was the place, where his father lives and kept on to introduce himself to me as my brother, eagerly waiting to show me his loving father. First I hesitated, but then the day came and I agreed to meet him.

Although this meeting had taken place only for a while, I yet felt in my childlike soul that I had touched eternity, something that lasts forever.

My brother said a single sentence to his father: „Father, this is your child, MY sister”, then in the short time everything was completed, I had become a Jewess, an adopted one. What an amazing grace, I thought.

Having returned from my heavenly Father, we played new games. My favourite one was called “Promise on earth”. We used to play it only once a week – on the “holy Sabbath”. Each time twelve siblings from the twelve tribes of Ishmael joined us. On the past earth in former times they used to keep their holy day on a Friday and with it they served a different God than the God of Israel, just like my former family kept the Sunday as their holy day. With contemplative heart I was pondering about Friday – Shabbat – Sunday. Has the ‘Forever Holy’ from the beginning on had been laid right in the centre, visible for everybody but than again such hidden until the Messiah comes? However, together we twentyfour (12 Israel + 12 Ishmael) united tribes danced around a tree, which my friend and brother called “The tree of life”.

He said, there was a day to come, when He would adopt every human being, longing with all their heart, strength and soul for being set free from the slavery of the church and other idols. I wept with joy, for after all this time I again had a father. I hugged my brother, who dried all my tears with the most wonderful words I had ever heard.

This story is dedicated to you, my son,
and my beloved daughters, wherever you may live. Have faith!
I want you to know:
real love never ends. I, Eric Martienssen, am your father and never stop thinking about nor praying for you.
And let it be a dream or not. Nothing is impossible to those who believe in HIM.
So I like to greet you with my Jewish heart and hope to see you once again, maybe:
Next year in Jerusalem.