Partner City Haifa: Prayer seminar with David Silver in Düsseldorf, with participation of Bremen and Erfurt 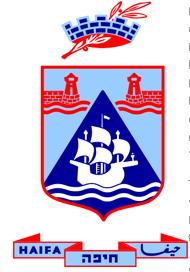 From 1st to 2nd of May 2009 took place a seminar with David Silver, under the leadership of the president of Bridge/Brücke Düsseldorf – Haifa, Johannes Engelhardt. This served the purpose to also get to know Israel groups and works in the other German Partner Cities of Haifa. The other two German Partner Cities (beside Dusseldorf, Bremen, Erfurt) Mainz and Mannheim could unfortunately, despite great interest not partake this time. Worldwide the Israel City of Haifa maintains 20 City partnerships. In Europe and even the rest of the World Germany is with 5 City partnerships the one most involved.

The base for a further expanding networking and cooperation in various projects was envisaged. This could happen during a meeting at Erfurt during the planned visit of the Mayor of Haifa, for the opening of the new Synagogue.

Amongst many other themes we also looked at the symbolic of the coat of arms for Haifa. It is covered by a crown and a peace bough (between God and mankind). A harbour mouth with 2 lighthouses stand for protection and orientation. A sailing ship is within a tent like triangle, beneath blue water, underplayed with red. Does this stand for the hunting mentioned in Jeremiah? (Jer. 16:16) Hunting doesn‘t run without bloodshed, but this does by no means need to be a Holocaust. As it is God who causes it, one can conclude, that only that much will happen as necessary to get the hesitant and undecided people going to return to Israel! Why all this happens in such a way you can read in Ezekiel 36 from verse 21, here the plan of God is unrolled.

(Zec 8:20-23 KJV) Thus saith the LORD / Jehovah of hosts; It shall yet come to pass, that there shall come people, and the inhabitants of many cities: And the inhabitants of one city shall go to another, saying, Let us go speedily to pray before the LORD, and to seek the LORD of hosts: I will go also. Yea, many people and strong nations shall come to seek the LORD of hosts in Jerusalem, and to pray before the LORD. Thus saith the LORD of hosts; In those days it shall come to pass, that ten men shall take hold out of all languages of the nations, even shall take hold of the skirt of him that is a Jew, saying, We will go with you: for we have heard that God is with you.

After the return of the Jews to their Holy Land this also will become a reality!