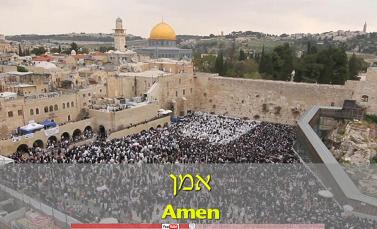 This parashat Naso tells us about to treat jealousy in a marriage, about tests between husbands and wives. Next theme is the Priestly Blessing saying (Birkat Kohanim – Numbers 6:24–26):

Many thousands of Jews gathered at the Kotel (the Western Wall) on the 2nd day of Chol HaMoed Pesach 5771 (the intermediate days of the Passover festival of 2011) for Birkat Kohanim (the Priestly Blessing) in accordance with the Torah’s commandment in the book of Bamidbar (Numbers) chapter 6 verse 23-27.

The ceremony has become a tradition ever since the liberation of Har HaBayit (the Temple Mount) and the rest of the Old City of Jerusalem during the Six Day War in 1967. It is in commemoration of the Biblical obligation to visit the Holy Temple on the three annual festivals, namely, Pesach (Passover), Shavuot (Pentecost), and Sukkot (Tabernacles).

It is also a special opportunity for many Cohanim (Jews who trace their lineage to Aaron, the first High Priest) to fulfill the Biblical obligation of blessing the nation, and for non-Cohanim to be blessed (also a Biblical obligation, according to some).

It is to be noted that the Western Wall is merely a supportive wall of the Temple Mount in which the Holy Temple itself stood. The holiday prayers emphasize our goal of returning to the Mount, and not to the courtyards around it: “Bring us to Zion Your city with joy, and to Jerusalem, the House of Your Temple, with everlasting happiness… Build Your house as at the beginning, and establish Your Temple on its foundation; show us its construction and gladden us with its rectification… and to there we will ascend and be seen and bow down before You on our three festivals…”

Be of this world! That’s what Torah demands of us. While allowing for the nazirite experience within a limited time-frame, the essential message of Torah is to immerse ourselves in this world and to sanctify this world. This is the true purpose of man.