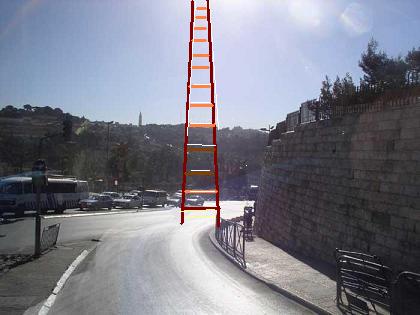 Commentary by Michael Schneider, Jerusalem:
Jacob begins his walk with God which was not so easy at the beginning, thus the emphasis is on “And he departed.” He left for a foreign country and place called Haran – far away from his father’s house. It was important that God reassured him of the promise: “…Behold, I am with you and will keep you wherever you go…” (28:13-15).

This time it was revealed personally to Jacob through a dream of a ladder connecting heaven and earth and angels of God ascending and descending. It was Jacob’s first personal prayer with the God of his fathers. He said: “Surely the LORD is in this place, and I did not know it.”

Jacob called the place “House of God,” in Hebrew Beth-El, from here the gates of Heaven were open. At this place, Jacob made a covenant with God: “If God will be with me and will keep me on this journey…” he will give Him a tenth of his riches. This became the secret of Jacob’s success!

Again we find in chapter 29 the first meeting of a future wife at a well. He fell in love with his cousin, Rachel, the daughter of his uncle Laban, a shepherd just as he was! This time it was one of Abraham’s clan (Jacob) who watered the animals of Laban’s flock, as Rebekah had done for Abraham’s servant before. We read that “Laban ran toward Jacob” (29:13) – was he expecting more gifts like Eliezer did?

The ways of the LORD are indescribably wonderful. What was Laban’s deceit? He gave him his older daughter to marry after he had promised the younger, Rachel. That should have reminded Jacob of how he deceived his half-blind father Isaac. The older sister and his first wife, Leah, had “weak eyes” (29:17). As Jacob, enraged and disappointed, reacted to the deceit, Laban said: “…It is not the practice in our place to marry off the younger before the firstborn.” (29:25-26) Immediately Jacob found himself on the other side of deceit, as he had done to his father, reaping what he sowed! That’s how God work.

Jacob worked another seven years for Rachel. We read: “…and they (the years) seemed to him but a few days because of his love for her.” (29:20) Now Jacob had two wives and he loved one and hated the other. That’s why the New Testament later recommends, like in 1 Tim. 3:2, to take one wife. God saw the discrimination of man and decided to close Rachel’s womb, the loved one, and open the womb of Leah, the hated one. It was the same with the two wives of Elkanah in 1 Samuel. God is just and merciful.

With her first three sons, Leah tried to win Jacob’s heart (29:32). Rachel adopted the solution of Sarah, Abraham’s wife who gave her handmaid Hagar to her husband. She gave her maid to Jacob so that “she may bear on her knees” (30:3). Eventually “God remembered Rachel, and God gave heed to her and opened her womb.” Yes, God remembers, hear and act! After the birth of Joseph, Jacob wanted to return to “his place.” And Laban realized “that the LORD has blessed him on Jacob’s account.” (30:27) May it be a clue for gentiles toward the Jews!