Hanukkah Lights Across the World 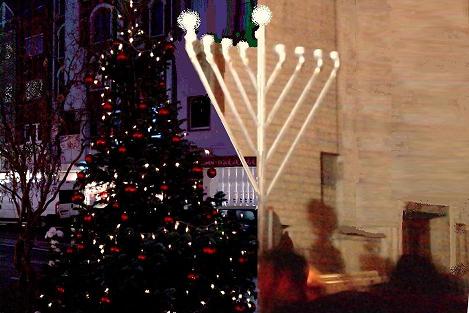 Once a year
heavenly light will be close to us.
Meant is not the Christ but in a very different way Jesus of whom a Jewish tradition says:
“Now it was the Feast of Dedication [Hebrew: Hanukkah] in Jerusalem, and it was winter. And Jesus walked in the temple, in Solomon’s porch.” (Gospel of John 10:22). To make a long story short, Jesus was a regular rabbi coming from Nazareth who refueled on the Temple Feast of Dedication and was about – like every other rabbi around the globe till the time being – to bring The Light into the world because “I [the LORD] have called You [Israel] in righteousness, and will hold Your hand; I will keep You and give You as a covenant to the people, as a light to the Gentiles, to open blind eyes” (Isaiah 42:6).
Sh’ma Israel:
“The LORD our God, the LORD is one. You shall love the LORD your God with all your heart, with all your soul, and with all your strength. And these words which I command you today shall be in your heart:”
Change the world, You, who are chosen! Bring My Light to the Gentiles, O Israel! That is what – like Jesus – the Lubavitcher Chassidim today do on Hanukkah on behalf of His Israel in U.S. cities and all over the nations.

It is the Jews who were chosen to open the blind eyes of the Gentiles / nations, not visa versa! Even if the church wants us to do the opposite credible – the decision and love of God, baruch HaShem, is eternal: “I will destroy on this mountain the surface of the covering cast over all people, and the veil that is spread over all nations” (Isaiah 25:7). The victory is Me – not the church. That is the story behind, that a small group of Jews (Maccabees and Jews in total compared to the world and the church) were victorious over the hundred times larger Syrian-Greek conversion heer in 164 BCE (→ Seleucid Empire), but after all in the devastated temple of God in Jerusalem was only a single pot of kosher oil for the eternal light to find. Not more than one day, this amount would have been enough oil, but by a heavenly miracle, the light burned for eight days. Which is precisely the time it took to complete the procedure for obtaining new kosher oil. Since that time celebrated all the faithful believers, religious and non-religious one, these eight days a year as Hanukkah (Hebrew: consecration / dedication), till our Second Temple was destroyed . . . by the Romans!

The same Romans had financed with the spoils of the 66 – 70 CE wars against Israel and the destruction of God’s Temple, the construction of the Colosseum from year 72 on (see German Wikipedia which is obviously not allowed to be translated in the American Wikipedia considering tourism collapse from Overseas might be) and later on founded their new religion against God, His Temple, His People, His Shabbat . . . and not least against the teachings of Jesus. . .

But Adonai, Adon Olam, remains the same (Isaiah 60), He yesterday . . .
. . . and You One in Him today on Hanukkah? . . .
“Arise, shine; for Your light has come! And the glory of the LORD is risen upon You. For behold, the darkness shall cover the earth, and deep darkness the people; but the LORD will arise over You, and His glory will be seen upon You. The Gentiles shall come to Your light, and kings to the brightness of your rising.”
. . . wherever You are!