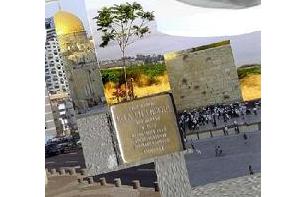 Abstract of the Commmentary by Michael Schneider, Jerusalem:
In last week’s Torah portion we learned about clean and unclean animals, this week’s reading begins with, “when a woman gives birth (tazria).” When a child is born, it is the beginning of all things. Also, in this reading we are shown that purity standards were given and at a time when the children of Israel were in the desert. Included in this passage, were also the differences in giving birth to a boy and a girl.

Later we read about the leper (metzora), who was healed through true humility. A classic example we find is in our Torah portion on the prophets. In II Kings 5, we read about Naaman, a prideful Syrian General, who first needed a godly lesson of humility by dipping seven times in the dirty Jordan River. This is what the prophet Elisha commanded him to do, as it is written in Leviticus 14:7. Before he could be healed he had to immerse and cleanse himself, not only physically, but also spiritually. –That’s real Godly Healing.