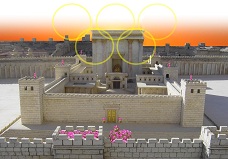 . . . “Individuals and governments from around the world, including Canada, the United States, Australia, Britain and Germany, have called on the IOC to hold a minute of silence in memory of the victims in Munich during the opening ceremony of the Olympic Games. In Canada, the House of Commons adopted a unanimous motion proposed by Liberal MP Irwin Cotler for a moment of silence. Yet at every opportunity the IOC has refused to include a special observance in the opening ceremonies, maintaining that the commencement event of the Olympics is not the appropriate time to remember such a tragic incident”. . . >read more … >>

One sentence translated from the >German Wikipedia >>:

This week we decided to bring our readers a video commentary on the Haftorah, which is read from the book of Isaiah (Yeshayahu) 1:1-27, because this Shabbat is the Shabbat before Tisha B’av, the Ninth of the month of Av, which is the anniversary of the destruction of both the first and the second Temple (Bait HaMikdash):