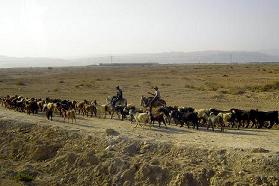 Commentary by Michael Schneider, Jerusalem:
This week’s Torah portion introduces Abraham, the first patriarch. It is here the Lord called him to “Go forth… to the Land which I will show you!” It tells us this was a step of faith that even believers find difficult to take. He risks everything.

Abraham, then called Abram, was obedient. Unlike believers today who want first a clear road map of where God is leading them, Abram picked up, left his home and followed God’s leading.

Abram’s life was one of constant tests of faith, beginning with the three-step call to leave his homeland (leave your country, your people and your father’s household), and ending with another three-step call in chapter 22 to sacrifice his son (Take your son, your only son, …whom you love). It shows full submission! God required of Abram the things he cherished most and he also wants those things we are holding onto most. Through our faith in Him, He intervenes and does His mighty work.

Abram left Ur (in present-day Iraq), the city of Nimrod, the adversary of God who elevated himself after the flood. A symbol of rebellion against God – out of this, God is calling us too today!

You are never too old to be targeted by God’s callings. God renews the strength to those who “Wait upon the Lord” (Isaiah 40:29-31). So, at age 75, Abram left his homeland and became the first “wandering Jew.”

Abram and his wife Sarai were facing numerous tests of faith. Even when Abram arrived in Canaan he encountered various conflicts within his family, but still he humbled himself, giving Lot first pick of the land, “… If to the left, then I will go to the right; or if to the right, then I will go to the left” (13:9). In those days, ‘right’ (yamin) was west, towards the sea (yam). Left, was the Dead Sea region of Sodom and Gomorrah and the Jordan Valley. Lot ended up choosing the left because it was visually appealing (the wealth of the world), but it was rife with immorality. Abram passed the test of faith and God blessed him. Lot could have repented and joined his godly uncle, but he preferred the things of the world and followed after the ‘lust of the eyes’. Lot could be as Ruth the Moabite joining Nomi and be a part of the blessing!

Interestingly, we find the term “Lot’s face” (penei Lot; normally translated as ‘covering’) in Isaiah 25:7 showing the blindness of the nations toward Israel’s promises! Like Lot was blind to the promises of Abraham.

Abram later rescued his nephew when five kings destroyed Sodom. After this encounter, Lot received an additional wake-up call to repentance, but again he chose the comfortable life.

As time went on Abram remained childless. Yet, he held on to promises like, “Now look toward the heavens, and count the stars… So shall your descendants be” (15:5). Abram and Sarai were between clinging to the promises of God and human desperation. Sarai became so desperate she even offered her Egyptian handmaid Hagar to her husband because “the LORD has prevented her from bearing children.” An act of a frustrated human.

In chapter 16 we read about the birth of Ishmael when Abram was 86 years old. By chapter 17, Abram had reached 99, Ishmael was 13 years old and all hope seemed lost for additional offspring. But it was at this time that God changed Abram’s name to Abraham. He made an unconditional covenant with him marked by circumcision and said, “I will establish My covenant between Me and you, and I will multiply you exceedingly… For I have made you the father of a multitude of nations” (17:2-5).

Therefore, after hearing another promise Abraham was the first to laugh (17:17) – then Sarah.

Next week we’ll see Abraham’s biggest test of all.