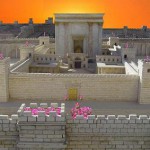 Abstract of Commentary by Michael Schneider, Jerusalem:
In Chapter 41 we read about Joseph’s divine gift of interpreting dreams, including Pharaoh’s nightmare of the seven healthy cows and seven weak cows, which represented seven prosperous years and seven years of drought and famine.

GSI: On Shabbat Hanukah – this year the Mikez / or Miketz Shabbat within Festival of Lights – the Haftarah reading from Zechariah is inserted, “behold, there is a lampstand of solid gold with a bowl on top of it, and on the stand seven lamps [eight on →Hanukkah – Change the World] with seven pipes to the seven lamps. Two olive trees are by it, one at the right of the bowl and the other at its left:

Now, after two years in prison, Joseph was transferred from the dungeon to the Royal palace. This was out of the ordinary, but that’s the way the LORD works when He intervenes. Just like during Exodus, after hundreds of years in slavery, the Hebrews went from being mistreated slaves to a victorious nation in less than 24 hours.

When Joseph was called he made it clear from the beginning that he was a vessel of the Almighty God of Israel (41:25). Do we give God the credit he deserves or take it for ourselves?

With Joseph’s interpretation, Egypt could prepare for the years of drought and so the ‘abundance became the reserve’ (41:34-36).

Joseph was then given the name ‘Zaphenath-Paneah’, meaning ‘Bread of Life’ in ancient-Egyptian. He saved the entire Egyptian empire. Salvation was found in verse 55: “Go to Joseph; whatever he says to you, you shall do.” Bread today is His Word!

Joseph became a Savior to the Gentiles first and then to the Jews because his brothers rejected him. We read in verse 40, “… Only the throne (of Pharaoh) would be greater than you.” Now when the dream the hated Joseph was telling them came true, his brothers bowed down to him as foreseen. Joseph’s time in Egypt, from the beginning was in God’s hand. Not only from saving Egypt, but also – in the end – his father Jacob (Israel) from death of famine.

Joseph like his father Jacob was separated for more than 20 painful years from his father’s home to accomplish a godly task. This Torah portion teaches us that we need to see things through God’s eyes as part of the ‘big picture’ in his plan of Salvation. Even smuggling money and the ‘goblet of the king’ in the sacks of the brothers and blaming them are sadly still anti-Semitic waves, making the Jewish people the scapegoat.

All things served one goal and purpose and that is drawing them closer to Him and protecting them from assimilation and returning home to the land of their forefathers symbolized by sitting at the table of Joseph. In our Torah portion we learn of Joseph’s second weeping (first was in the ditch) when he ‘lifted his eyes and saw his brother Benjamin, his mother’s son… Joseph hurried out for he was deeply stirred (origin in the Hebrew: overwhelmed with mercies – rahamim) over his brother, and he sought a place to weep; and he entered his chamber and wept there’ (43:29-30).