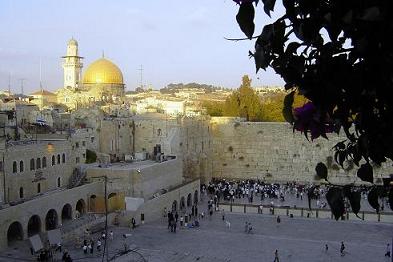 A well-known Hebrew writer, described in his story the eternal wandering Jew; wandering with his rod, bent under a heavy bag on his shoulders, a long beard, tired, stepping through the endless steppe of Siberia. He encountered Ivan, and Ivan asked him: “where are you coming from”? “I come from Jerusalem”; “ and where are you heading for”? “I am on my way to Jerusalem”! That’s the story I am going to tell you.
When we start with the first Israelite, Abraham, we find: Abraham was the father of the Jewish people; Abraham was the father of the Jewish faith; after all, God had made a covenant with Abraham, including all his descendants. Abraham was also the father of the Promised Land; being a nomad, on command of the Lord, he left his country in order to go and settle in the Land of Canaan. We realize that these three components already are interwoven in the figure of Abraham: the People, the Jewish faith and the Promised Land; indeed, if one of those components is missing, the world is not perfect in the mind of a devout Jew. The People, the Faith, the Land!
Many centuries after Abraham, the tribes of Israel crossed the Jordan river and settled in the Promised Land; not given to them; not handed over; just granted to them – the Land belongs to Him – granted under certain conditions: that you remain faithful to Me, that you don’t idolize other so-called gods, that you follow my commands and be obedient to me. If not, you shall be punished, destroyed and chased out of the country. And indeed, the tribes of Israel turned out to be adulterous, and punishment had to be expected. All the prophets of the so-called Old Testament keep warning again and again; Hosea, Joel, Amos, Jeremiah all keep warning and threatening.

By the way: in January of this year, archeologists discovered remnants of an Israelite Temple, dating abt. 1000 B.C. – a few miles west of Jerusalem – a structure where the God of Israel was worshipped; many artifacts found there, were ritual objects, which would be considered idolation in the eyes of the prophets. Indeed divine punishment was unavoidable…

The first deportations were in the days of Saragon, king of Assyria – the most cruel people of antiquity – 722 B.C., when the ten northern tribes were forcibly transferred to far away countries, and until our days no-one knows their fate; now-a-days, probably descendants of the tribe of Menasse are repatriated from India to Israel; may be Ethiopian Jews who were repatriated a few decades ago, are part of the lost Tribes, of which the prophets foretold, that at the end of the days they shall all return, by the grace of the living God.

A second wave of deportations occurred in the days of the prophet Jeremia, (587 B.C.) when thousands of Judeans were brought as slaves to Babylon; however 50 years later, the Persian Empire subdued the Babylonians; King Cyrus showed himself lenient to the Jews, and he even permitted Judeans to return to their homeland and rebuild their temple in Jerusalem. However, a minor part of the people returned under Ezra and Nehemiah, whereas others stayed in Exile; the political and economic conditions proved to be better than in Israel, where wars and revolts impoverished the local population, and arbitrary behavior of foreign rulers brought misery and destruction to them.

Also in matters of science, education and religion the Jews of Babylon developed significant; they were more or less autonomous, and were represented to the local authorities by a so-called Exilarch; we know that until the ninth century these Exilarchs were descendants of the Davidic dynasty.

The final return to their homeland happened in 1961, when abt. 150,000 Jews came almost overnight from Iraq, after an exile of 2500 years. Many with names like Ezekiel … a real miracle!!!

The next deportations started in 70 A.D. when tens of thousands of Jews were sold as slaves in the roman empire; this was a result of the great revolt against the Romans, and the subsequent destruction of Israel, Jerusalem and the holy second temple.

Watch film/video documentation
History of the Roman Colosseum (duration min. 9:45):
… “it was financed by the sale of precious relics taken from the Jewish Temple during the savage sacking of s Jerusalem. 12,000 Jewish captives were brought back from that campaign to build the amphitheatre”…

Jews dispersed all over the Roman empire, around the area of the Mediterranean, than moving to western Europe; in the middle ages moving to the east of Europe, and in the last few centuries spreading all over the world.

But through all these centuries, the people of Israel did not forget their homeland; usually, when people are forced into exile, they long for returning home; but for the Jews their country had a additional dimension: it was the Promised Land, it had a religious dimension! One of the three above mentioned components of their identity was missing: the Promised Land … their world was imperfect.

So Jews were throughout the ages trying to return, but reality did not permit a return of masses, not in the time of the Romans, not in the byzantine period, not in the time of the Mamelukes, neither under the Muslim and Ottoman rule, even not while the British were ruling the country; eventually Jews postponed their return home to messianic times – you know that for the Jewish people the redeemer did not come yet – but when the Messiah would come, he would bring peace and happiness to all nations, no diseases, no occupations … and for the Jewish people on top of all the final return to the Promised land.

Especially, in times of persecutions, the level of expectations of redemption flared up, being understood as birth pangs of the messianic time; remember when Jesus on the Mt. of Olives was asked by his disciples, when all he foretold shall become true (Matth. 24). He portrays a time of affliction, of war, of hunger and earthquakes, before the final days. Thus with the rising hope of redemption, the waves of expectations rose, and born by those waves, appeared men, who were claiming to be the Redeemer. They themselves or their followers.

Especially in times of distress, there appeared abt. a dozen of so-called false redeemers; failed, because they had not brought the hoped-for redemption. I want to mention a few names: David Re`ubeni, Shlomo Molcho, Asher Lemlein, in Yemen, in Kurdistan, and even about 250 years ago Jakob Frank, in the Ukraine … all of them brought only disappointment, and no salvation.

I want to underline that none of those men were ever scolded or abused by the people of Israel, neither flogged, killed or crucified; only lamented, deplored for not having brought this final redemption; in this respect I believe that the crucifixion of Jesus must have had other causes, may-be a clique of politicians or High-priests, acting in order to appease their roman rulers , to prevent worse things to happen… ”better that one man dies, than the whole people…”!

The most famous of those failed Messiasses was Shabbatai Zwi, born in Smyrna, Turkey, who lived in Saloniki, and later in Gaza: the rumor about his appearance anno 1666 spread like wildfire throughout the Jewish world of those days, and exhilaration rose to unprecedented heights ; I lived in Amsterdam, and I know that a delegation of the Jewish community went every morning to the harbor, to see, whether the Messiah had arrived, in order to take them to the Promised Land. Some otherwise sober businessmen with worldwide connections sold their properties, in order to prepare their return. I want to cite from a diary of Glueckel von Hameln, a Jewess, living in those days in Northern Germany. She was married very young, but her husband died early, and in distress, she started to write a diary during 30 years, a diary which miraculous survived centuries, and was published in our days; later she married again, bore 8 children and rebuilt the business of her first husband out of the mess he had left.

Kleef on the present dutch border….prince Mauritz….who had an estate there, personally was clinging to “the most beautiful and attractive boy of 5 years, letting not loose…