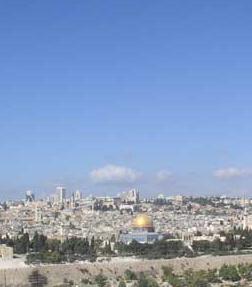 by Israel Yaoz
« From Jerusalem to Jerusalem Part 1

It is impossible to describe the exhilaration who befell the crowds, when letters arrived from Schabbatai Zwi (or Sabbatai Zevi, Shabbatai Zwi); all the young Portuguese (Jewish) men dressed themselves in their finest dresses, and wrapped themselves with green, silken ribbons, that was the livery company of Shabbatai Zwi, and thus they went all in their Synagogues and read aloud and with indescribable joy those writings. Some people sold their houses and all their possessions as they hoped that redemption would arrive any day.

My late father-in-law, who lived in Hameln, left his hometown and his house, his courtyard and all the valuables and furniture, and moved to Hildesheim. From there he has sent us here to Hamburg two big barrels with clothing and food like peas, beans, pickled meat, dried prunes and similar stuff that stays edible. Because the old man believed that one could travel from Hamburg to the Holy Land without more ado.

Those barrels remained more than one year in my house but finally my in-laws feared that the meat and other items would get spoiled; so they wrote us, we should open the barrels and take out the food so the clothes would not be spoiled. This way the barrels remained with us for three years, and my father-in law believed that he would need them for his voyage. But the Almighty has not yet decided to redeem us; we know for sure that the Lord has promised it, and if only we would be thoroughly devout and not so evil, I am convinced, that God will have mercy on us; if only we would keep the command: Love they neighbor like yourselves! But once He will show us His compassion, as we believe. The jealousy, the groundless hatred which exists among us, that cannot be right; nevertheless dear Lord, whatever You have promised us, You will keep royally and merciful and if because of our sins, it is delayed for so long a time, we will get it for sure, when Your time has come. Therefore we keep on hoping, and pray to You Almighty God, that once You will enjoy us with complete redemption…