From Jerusalem to Jerusalem 3 – including Passover Prayer PESACH SERMON 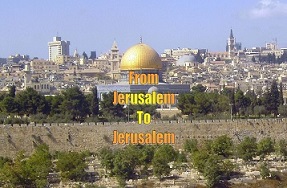 Another quotation I wish to bring is from a book widely read some 40 years ago: “The last of the Just”, Andre Schwarz-Bart; written in French, living in Strasburg after WW-2.
The writer cites an old Jewish tradition, which claims that there are 36 hidden Zadikim, 36 Just in our world; hidden, no-body knows them, neither themselves are aware of their high mission – it could be you, or Me, or he – but if only one of them was missing, the whole world would crash like a card-house. The writer depicts it, as if it are dynasties – their genes being inherited from father to son – and lets the story start somewhere in the year 1200 in York, England, and it ends – like this Roman is called – with the Last of the Just, who suffocated in the gas-chambers of Ausschwitz.

In the year of the Lord 1185, March eleventh, the bishop William of Nordhouse held a sermon, and with his cry “it is the wish of God” the exited mob poured into the court in front of the church; a few minutes later confessed the Jewish souls all their sins, to their God, which had summoned them through the mouth of the bishop.

Some inhabitants, using the turmoil, found refuge in an old uninhabited tower … while their homes were plundered.
On the morning of the seventh day, Rabbi Yom Tov Levy gathered all the besieged unto the upper platform of the tower. “Brethren”, he said to them, “ God gave us life, let us give it back to him with our own hands, like our brethren in Germany have done ”.
Men, women, children and elderly people, all held their forehead for the blessings of his left hand and than their chest for the dagger-stab of his right hand.
The old Rabbi remained alone before his own death. “There were counted on the platform 26 Jews, without taking into account the women and the little brood.”
The Rabbi still held the dagger in his hand, which had pierced his throat. This dagger was the only weapon found on the tower.
The truth is that knowing the history of my people reasonably well, I had never heard before about this event; I presumed it to be a poetic licence, allowed to any writer of novels.

By chance it happened that in 1982 I visited York with my youngest son, then 12 years old; we were standing in front of its marvelous Cathedral, world famous for its harmonic perfection; I was enchanted by its beauty – my eyes on the building; suddenly my little son interrupted me, pointing to the bottom in front of us: “ Look Daddy, Hebrew letters.” I did not believe my eyes, but on the soil like a kind of memorial, was engraved in golden letters that tragedy!

But not about this event, neither the events during Holcaust, I am going to cite:
We are in the year 1917, in Southern Poland, Mordechai, the Lamed Vav of his generation, a young man, in his typical jewish dress, with side-locks, moving from one community to an-other – sometimes doing a job, sometimes following lessons in the Jeshive, …and of course on Friday afternoon, seeking the synagogue of the nearby village, before the beginning of the holy Sabbath. As usual, the devout are fighting for the honor of taking such a lonely wanderer to their home, in order to give him shelter over the weekend; in our case the honor was given to the Rabbi, and after service they assembled at the Friday-night meal, the Rabbi and his wife, some guests and Mordechai; I cite:

The meal was exquisite, Mordechai could not have dreamed of something more delicious; Gefilte fish, meat, and a tasty desert of sweet carrots. Mordechai marveled about the warm hospitality. However when the hostess offered a plate with carobs, he could not overcome a surge of longing, and while rubbing his stomach, he exclaimed:
No really, brothers, brothers, a piece of carob, like a fruit from the Garden of Eden, that conjures the Land of Israel….Eating it, your gaze becomes blurred, and one sighs:
Lead us back, to our land, Oh Lord, to that region where goats are feeding on carobs in abundance.
These words aroused something in the mood of the dinner partners, and started off the eternal questions: When will the Messiah arrive? Will he appear on a cloud? Will the dead join the return to our Land? And what shall be the kind of nourishment, as is written: It shall be in those days that I shall make for you a covenant with the animals of the field? “And how can we speed up his Coming?” asked the Rabbi finally, while stretching out drearily both his arms.
Now, all the guests knew, the two thousand year old discussion reached its peak; the terrifying height, from where one overlooks the whole Creation. We have to suffer, mentioned a venerable old man, sitting next to the Rabbi, to suffer, and again to suffer, time and again, because it is written: We shall bear the sufferings of the world, we shall take its pains upon us, and be looked upon as a punished people, beaten and humiliated … Only then, when Israel shall be suffering, from its head to its feet, while aching on all its bones, all its tissues, when it will be flung down on all the crossroads, only then shall God send the Messiah, …unfortunately, closed Mr. Gruenspan the discussion, and his eyes protruded, as if having a vision of those terrible, future happenings, only then, not earlier. Mr. Gruenspan, let us talk about something more enjoyable, what news is there about the ongoing war?