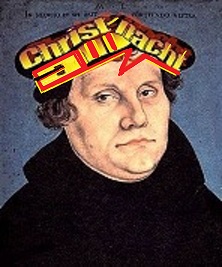 It was the night of 9th on the 10th of November – Martin Luther’s birthday! – that should be, in 1938, as a birthday present dedicated to him, the man who has called the Germans and the entire Christianity 400 years prior to this date:

„Firstly, that their synagogues or schools be set on fire and, what may not burn, be heaped over with earth, so that no human being could see a stone or cinder for ever. And such should be done to honour our Lord and Christianity, so that God may see that we are Christians.” ————————————————————————————–
In Old-German-Wording: “Erstlich, das man jre Synagoga oder Schule mit feur anstecke und, was nicht verbrennen will, mit erden überheufe und beschütte, das kein Mensch ein stein oder schlacke davon sehe ewiglich. Und solches sol man thun, unserm Herrn und der Christenheit zu ehren damit Gott sehe, das wir Christen seien.“

Today this Luther is celebrated again by Germans, the Lutheran Church, called Luther Decade. Again Germany reaches out for the world. Again the whole world keeps silence – This is the Sound Of Silence (sang by two Jews). What one can hardly dare to pronounce about Martin Luther and his Lutherans, the Germans, the Kristallnacht (also “Night of Broken Glass”, “Reichskristallnacht”, “Pogromnacht”, “Novemberpogrome”), and the world against Israel and the jews nowadays, the following video will, at least, try: