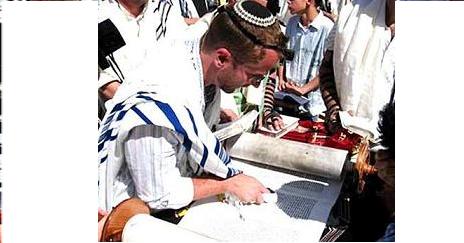 Commentary:
This week’s Torah portion Chukat / Hukkat contains further “ordinances” (Hebrew: hukkim). First, we read about the “water of cleansing,” an atonement mechanism made from ashes of the sacrifice of a red heifer. The ashes are kept (Numbers 19:19) for the cleansing of a person who came into contact with a dead body or became unclean even by touching a grave.

Not much is known about the red heifer, but Jewish sages say nine red cows have been sacrificed since the giving of the Torah. According to Rambam, sacrificing the tenth red cow is reserved for the Messiah himself. Moses and the high priest Eleazar sacrificed the first red cow, slaughtered and burned outside of the sanctuary in the desert. The “cleansing ashes” of the cow were kept and used for many years.

Scientists are currently conducting tests and experiments on farms in Israel to try to isolate the genes of a red cow – not a single black or white hair is allowed.

Chapter 20 goes on to talk about Miriam’s death and burial in Kadesh.

And then, when water became scarce once again, the grumbling of the people also picked up. “Why did you take us out of Egypt to die in the desert?” (20:5). From a human perspective, the people had a good reason to grumble in the blistering heat. Believe me, many of us would do the same! But Moses took his rod and said: “Hear now, you rebels; must we bring you water out of this rock?” (20:10). Angrily, Moses struck it twice instead of just speaking to the rock as God had commanded. This was happening while he was still coping with the death of his beloved sister who had saved him when he was a child.

As God’s representative, Moses did not act as the Almighty had commanded. The punishment was harsh: Moses was not allowed to enter the Promised Land. But even though God punished Moses and Aaron, He provided water, the so-called bitter waters, but water in abundance, enough for more than 1 million people – another miracle!

When Aaron died, the people mourned for 30 days and Eleazar, his son, became High Priest. Chapter 21 talks about the victory over the Canaanites from Arad.

When the people complained again about a lack of water and food, the Lord sent poisonous snakes among them and many died. A serpent of bronze was erected on a pole and became salvation and healing for all who saw it. The serpent on a pole later became the symbol of modern medicine. Again, the punishment for the repeated grumbling ended in healing.

This event holds deep spiritual meaning: The fall of mankind occurred because of a serpent that infected all of mankind with its devilish poison.

Here another Commentary by Rabbi Chaim Richman, The Temple Insitute: